Last night, I had the pleasure of attending an info session for a TechShop that will be opening in the Durham, NC area later this summer. TechShop is a well-equipped project center built by Makers, for Makers. They say: “It is like a health club with tools and equipment instead of exercise equipment…or a Kinko’s for geeks.”

Based on what we heard last night, I’m really excited. They’ve got laser cutters, mills, welding equipment, industrial sewing machines, and the like. There will be classes and workshops on a number of topics. If their first location (in Menlo Park, CA) is an indicator, there will be an active community of Maker folks to chat with and trade tricks and ideas. Sound like a great place to work on your projects and have access to a bunch of great hardware that you wouldn’t generally have access to.

me and my Kindle

If you know me well… heck — if you know me at all — you know I like me some gadget. I’m also an avid reader. I’d been eyeing Amazon’s Kindle since it was announced with the understanding that for me it was a question of “when”, not “if” I shelled out for one.

I put in an order in early January, flush with post-Christmas cash to burn. The gadget had already been on back-order status for a while. Figured I’d get on board. Soon after, I configured a Google Alert to scan headlines and blog postings so that I could stay on top of Kindle news. I’ve seen a lot of trends that surprised me and I note some of my thoughts below.

I was surprised to see this. Yeah, perhaps he’s sweating the Kindle’s entrance into the consumer electronics market, but I think he really believes what he said. I read. I love to read. I figure that I read ~10-12 books a year, mostly fiction. This excludes the ~12 books that I listed to in audiobook format (from my beloved Audible.com) each year. My friends read, too. I’ve recently started sharing book notes with several of my friends via GoodReads.com. What was he thinking?

Kindle-formatted books are selling slowly:
So far, the only things I’ve read on my Kindle (in the week I’ve had it) are a couple of newspapers and blogs, the Kindle user manual and a couple of chapters of Cory Doctorow’s Down and Out in the Magic Kingdom. Why haven’t I rushed out to purchase a bunch’a Kindle-format books? I’ve got about half-a-dozen dead-tree-format books sitting on my bookshelf waiting to be read. Hey – it’s February. Didn’t you get a bunch of books for Christmas?

Kindles aren’t for “paper-book lovers”:
Yeah. Whatever. I love paper books. The cover, printing, dust-jacket, etc. for Dave Egger’s What is the What? is truly a thing of beauty. The flip-book passage and page treatments from Steven Hall’s Raw Shark Texts just “work” on paper in a way that I don’t imagine they would in an e-book. (note: neither of these titles are available in Kindle format) But – I also really love the idea of carrying a small library around in something the size of a paperback. That’s just plain awesome.

No Kindles have been spotted “in the wild”:
Dunno. I’m a normal-ish person. I’ve got one. Haven’t really had it out of the house, I guess, for the paparazzi to get a good shot. Kindles’re out there and not just in the hands of reviewers.

So much fuss – Amazon’s gotta be doing something right. I love my Kindle. Reading on it is nice. Internet access isn’t great, but I’m not too bummed about that. All-around, I’m excited about the future of the Kindle and the direction it’s heading.

ps – if you’re interested, it took just under a month for my order to be delivered.

Update – check out the new lamp enclosures I’ve made for my orb.

I’ve recently begun to experiment with an open-source hardware platform called Arduino. Arduino is kinda like an amped-up basic stamp. You program it using C via a handy standardized cross-platform GUI. There’s an active community around the platform and lots of good example code out there to farm and repurpose.

It’s exciting: I can actually write programs that interface with the ‘real world’. Arduinos can sense temperature, light, heat, touch, etc via whatever sensor you care to connect to it. It has a bunch of digital and analog inputs and outputs, allowing you to Frankenstein a wide variety of fun projects.

I received most of my help from Lady Ada’s awesome tutorials. Once I was comfortable, I began to work on some personal projects.

Todbot featured a cool project that let you grab a color from a Web page and display it as a color using LEDs connected to an Arduino. I built a similar Orb using Tod’s (via ThingM) BlinkMs. The BlinkMs (as seen on BoingBoing) are “smart LEDs” that allow you to output a color based on RGB or HSB color input. My prototype currently uses 2 BlinkMs and it’s reasonably bright.

I have some PHP code that I wrote to display glanceable weather info on my Chumby. I’m trying to replicate the behavior of my Ambient Weather Beacon.

The code grabs today’s forecasted high temp based on a zip code using Yahoo!’s APIs and maps the temp to an RGB color (ala #ff0000), returning XML containing the temp and the chance of precip. After 3pm, it should display tomorrow’s forecast.

I mixed Todbot’s example and my own PHP and I now have a pretty decent Arduino Ambient Orb Weather Predictor. 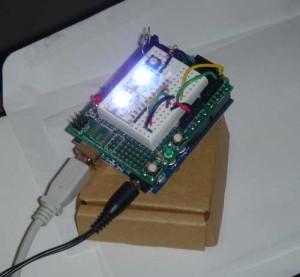 So… program 1 (PHP) lives on a Web server and grabs data from Yahoo!, program 2 (Processing) runs on my PC and grabs output from program 1, then reports it to program 3 (Arduino) that displays the color.

If you want the code: weather predictor PHP.

You’ll need PHP5 (I used simplexml). There’s lots there that needs to be cleaned up and I’ve only partially implemented the precipitation pulse. If you find it useful, please let me know.