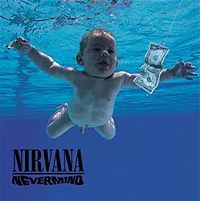 My MP3 jukebox displays album covers on the TV when a track is playing. Said Nora, my 3-1/2 year old, of the cover to Nirvana’s Nevermind:

That baby is sinking because it’s not wearing its floaties.

The Mona Lisa in 80ms

Finally got my site ported from a bunch’a Coldfusion and WordPress scraps in to a cohesive ‘Wordpress as CMS’ implementation. Still working on some loose threads, but most everything should be working!

And now that I’m running current code, I’ve turned comments back on.

For as long as I can remember, Boondini’s in North Raleigh’s Celebration at Six Forks shopping center has been preparing the finest sandwiches and soups to be had in the area. Recently, a Mickey-D’s set up shop right in their front yard. “No prob,” I thought, “people are smart enough to pick the real deal over some McCrap, right?”

Looks like I might’a been wrong — the two times that I’ve visited since McD’s opening, Boondini’s has not seemed as bustling as I’m used to. No line at the register, tables empty even during the lunch-hour rush.

This makes me so very sad. Maybe I just happened to visit during a lull? Dunno, but consider this a call to arms: do the Right Thing and grab lunch at Boondini’s this week. You’ll be glad you did.

My personal faves, if you care to know: The baked chicken combo, “eat this” (egg salad and ham, grilled) on sunflower bread and fresh so-freakin’-good orange-ade.

i also bought it as a package. i also bought it as a package., originally uploaded by ih8gates.

Posted in web | Comments Off on i also bought it as a package.