My Opinions are Sound

One of my favorite NPR shows is Sound Opinions. The show bills itself as “the World’s ONLY Rock and Roll talk show”. Back in June they aired their ultimate summer songs show. It’s well known that Jim hates summer and especially the beach. I called in last week to their hotline with my pick for a song that Jim should’a put on the list (in fact, as he was intro-ing Wire’s Sand in My Joints, I thought he was going to play my song…)

I just got a call from show producer Todd Bachman letting me know that my call will be used on the show this week!

If you’re in NC, you can listen in to WUNC at 4pm on Saturday to hear the show. After the show has aired, it’ll be available in their podcast. Looks like it’ll be show #147.

They play the calls at the very end of the (hour-long) show.

Update: Here’s a link to download/stream the show.

Hmmm. can’t get enough of the Mythbusters YouTube-ness.

I Am An Insect

This weekend, we took the kids to the NC Museum of Art to see Paperhand Puppet Intervention’s I Am An Insect. Wow. It was incredible to watch and the live accompanying band was excellent. The kids had a great time and haven’t stopped talking about it…

Here are a couple pics. Note that if the one you’re looking at is a video, you’ll see a triangular “play” button on the middle of the picture that you’ll have to click on if you want to watch the vid.

I’ve recently spent a lot of time, recently, finding the connectors between bits of Raleigh’s awesome greenways. I’ve done a bit of scouting on my own, but recently came across several PDFs of maps that originally ran with N&O stories about the various trails. The N&O did a great job with these, going above and beyond the Raleigh Park and Rec version to help point out turns and transitions that you might miss.

Note that it’s really easy to get to the Crabtree greenway from Shelly lake, making it a nice starting-point for excursions.

I’m planning on doing some research into the Walnut Creek trail, too. They’re dedicating a new section this week. The official greenway map is dated 2007, so it’s not 100% up-to-speed on recent completions. It shows some proposed peices along this stretch – I’m hoping that this means continuous travel from Centennial Campus on the west end, to Walnut Creek in the east.

No discussion of Raleigh adventure would be complete without a link to Joe Miller’s “Get Out! Get Fit!” blog.

Anything to add? Please let me know in the comments.

Note: As of this posting, many of these routes are temporarily closed due to flooding caused by Hannah. Check the Raleigh Parks and Recreation site before you head out. They’ll have closing alerts on their homepage. 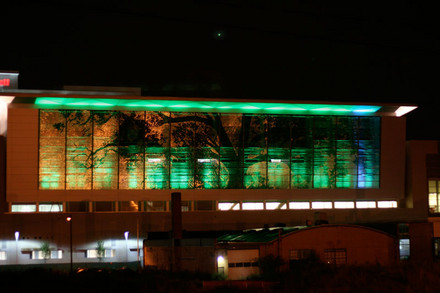 New Raleigh has some nice photos of the Shimmer Wall being lit for the first (official) time.

I’ll laugh when I finish crying. I was in that meeting.