Quickly deploy QR codes to link from real-world to web.

QR codes are two-dimensional bar codes. They’ve become popular recently as a way to link to web sites from real-world items like product packaging, magazine ads and “home for sale” signs. Scan a QR with your phone and you can instantly be linked to a web site. QR codes can store lots of other kinds of text info, too.

Several years ago at SXSW, I met Dustin Haisler, who at the time was CIO for the town of Manor, Texas. Dustin used QR codes to mark items around town to link visitors to additional information online. He had great success at opening up the actions of the local government without spending a lot of money.

Since meeting Dustin, I’ve had ideas rattling around in my head about doing something cool with QR codes. At last month’s CityCamp Raleigh, ideas and inspiration clicked together and it occurred to me that it’d be interesting to use QR codes as temporary advertisements/info markers. Short term, I’ve got two ideas I’m experimenting with: 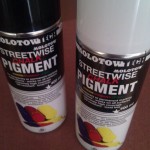 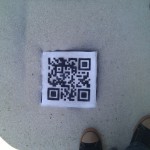 The idea I came up with was to build a rig to allow me to quickly tag QR codes on walls or sidewalks. I did some research and found that someone did something along these lines at TED, but I couldn’t find any instructions or guidelines for creating tools. I ended up making a rig that can be used to spray QR codes on a flat surface. I use spray chalk to make the codes temporary. My prototype creates a QR that links to the Five Points CSA Facebook page. I used a URL redirect on the CityCamp Raleigh server so that I could point the link somewhere else if needed (say a Flickr group or another web page). Then I shortened the URL via bit.ly. I shortened it for two reasons: 1) bit.ly records usage statistics 2) shorter URLs make simpler QR codes. 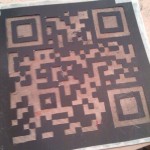 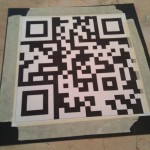 My QR rig is built from card stock. Card stock is relatively durable and easy to cut with an exacto knife. I’m working with someone to create a vinyl version that should be a bit more durable and allow me to spray the template clean. The magic sauce, I’ve found, is fiberglass screen. It’s just like the screen on the windows of your home. You can buy a roll of it from your local builder-supply shop for about five bucks. The screen gives you a base that you can attach the card stock to. This is important because it’s likely that your QR will have bits that aren’t attached to the main shape once you’ve cut them out.

I reversed the image of the QR before I cut it out. This is optional, but since I was cutting the image from black card stock, this just seemed to make my brain hurt less. I’d recommend using white card stock, though. That way, after you do your exacto-work, you can put a piece of black paper behind the cutout and check to make sure that it scans with your phone.

I’m and Android user. Google Goggles on my Nexus One scans my spray-chalked codes really quickly. I still don’t have a good test of scanability on iPhones, since I don’t have access to one. I’ve emailed photos of the code and the photos scan on an iPhone, but I still need to do some more real-world testing. It looks like the camera on iPhone 3’s and earlier is pretty crummy. But in this case, the iPhone is my Internet Explorer, so I’ll keep working on increasing the scanability for iPhones.

This entry was posted on June 21, 2011 at 4:18 pm, filed under tech evangelism, web. Bookmark the permalink. Follow any comments here with the RSS feed for this post. Both comments and trackbacks are currently closed.